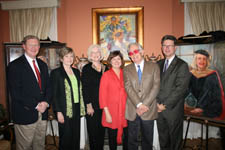 Dr. Carolyn Langston, a faculty member who was the first employee hired at the college when it opened its doors as Southern Arkansas University-El Dorado Branch in 1975; and Charlie Thomas, a former SouthArk professor who is a member of the college’s board of trustees, each received a portrait in a ceremonial unveiling and reception at the home of Foundation Board member Steve Cameron.

Both recipients were deserving of the honor and have demonstrated exceptional support of SouthArk through many years, according to SouthArk Foundation executive director Cynthia Reyna.

“Dr. Langston has distinguished herself through her dedication to student learning, career achievements and professional development, which bring prestige and pride to the college. 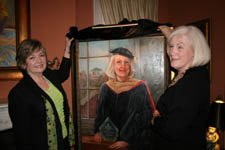 Mr. Thomas helped lead the campaign to merge Oil Belt and SAU-El Dorado into SouthArk and served as the first chair of the South Arkansas Community College Board of Trustees, where he continues to serve today,” Reyna said.

A 33-year SouthArk veteran in the business department, Langston was the first doctorate-holder on the college’s staff. Hired to teach, she nonetheless worked in a variety of capacities as the institution was being established, including hiring employees and enrolling students, according to Reyna.

Langston’s influence has extended into financial philanthropy as well, as she has established two different fully-endowed scholarships for student learning.  “From her role in the stark conditions of the early days of SouthArk, with a job description that read ‘whatever needs to be done’; to her long list of academic and professional credentials, I see a foundation carefully laid that would support a life and career committed to serving this college and its students,” Foundation Board member John Dews said on Thursday. 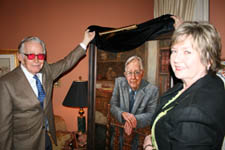 Thomas taught anthropology at the school in 1985-’97 and in addition to his SouthArk Board position, has had a lengthy term on the Foundation’s Board of Directors. “I cannot think of South Arkansas Community College—the twig, the branch, or the full-grown tree—without conjuring up pictures of Charlie,”

Foundation Board President Clara Jones said before Thomas’ portrait was revealed. “He's been here from the beginning, and I don't think it an exaggeration to say that he's one of a handful of people, along with Carolyn Langston, without whom this college would not exist.”

Van Hook, an art professor at the college for 25 years, worked on the painted portraits over recent months. She called it the high point of her career.  I was deeply honored to have the privilege of painting the portraits of these two outstanding benefactors,” Van Hook said. “Having known both Carolyn and Charlie for many years, I have seen the monumental impact each has had on education in south Arkansas.”